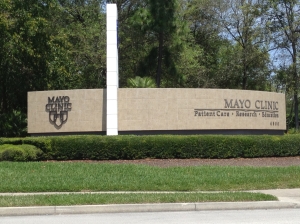 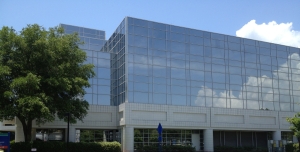 Fountain on Mayo Clinic Florida campus across from Davis Building 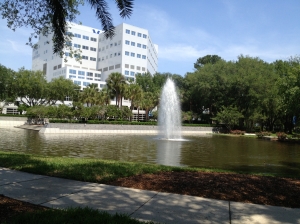 I am attending the Mayo Clinic Center for Social Media residency in Jacksonville, Florida. Like most physicians, I am passionate about engaging patients in a collaborative dialogue about health and wellness. I work in the Division of Hospital Internal Medicine at Mayo Clinic Florida. My goal is to help patients stay healthy enough to stay OUT of the hospital.

I blog about health issues important to adult and children’s health. Unfortunately, I am “technology deficienct” so my goal for doing the social media residency is to learn in greater depth the “tools for social engagement.”

What I learned during the social media residency was best practices in using various social media platforms, including Facebook, Twitter, Pinterest, LinkedIn, YouTube and wordpress blogs. Social media has limitless potential to advance patient and physician knowledge alike, and help them work collaboratively on medical care.

And I want to be part of the #Revolution!

Ever notice how pervasive the internet is in our daily lives? Take the recent example of Halloween.

Photograph of Mount Rushmore Courtesy of Ed James
“What do you think about dressing up as Abraham Lincoln for Halloween?” I asked my son. I thought I would dress up as George Washington, his friends could dress up as Thomas Jefferson and Teddy Roosevelt and we could start a Mount Rushmore Road Show.
My son rolled his eyes and said nothing. I was worried he might be on Facebook “unfriending” me or placing an ad on Craig’s List: “For Sale, Lame Mom. Uses whole sentences to text. Takes notes at Parent -Teacher conferences. No, It’s NOT ok to contact me with other services or commercial interests.”
Maybe his mind, like the American advertising community, had already moved past Halloween onto the critical Christmas shopping season, which starts directly after Back to School shopping season. (I am still trying to figure what to do with those ten protractors for $20* I bought in the Back to School Specials frenzy).
But no, he texted me, “i want 2 dress up as google toolbar.”
Naturally we started our Google costume search on Wikipedia. When I moved to the United States from India at age five, one of my most prized possessions was a complete set of the Encyclopedia Britannica. It took my parents a long time to save up enough money to buy me a set. In fact, I have kept the 1978 edition until this very day to peruse on those late nights when I don’t get 30 junk emails (Note: place Unsubscribe in subject line), 20 email newsletters from Mailchimp or a notice urging me, “Vandana, read LinkedIn’s update about Dr. Extraordinarily Smarter and More Accomplished than You and on the verge of winning a Nobel prize.”
Next we searched Google for Google (my son on an iPad, me on my iPhone).  Apparently I wasn’t feeling lucky because the search yielded only sponsored sites selling skull and crossbones ice cube trays, toxic waste candy, zombie blood energy drinks, and ketchup/mustard packet baby costumes.
We moved on to eBay. No Google toolbar costumes but we were able to bid on some Angry Birds Halloween costumes and Albert Einstein wigs.  We also auctioned off 10 protractors, shipping included anywhere in the continental United States.
I figured some industrious and creative parent had already thought of the Google costume and posted a How To video on Youtube, but no such luck.
Finally I went Amazon.com because one can buy ANYTHING on Amazon. I didn’t find a Google toolbar but I did find a couple of protractors (on sale for a mere 10 for $5 with $4.95  shipping!) to put on my Wish List. Those helpful folks at Amazon were kind enough to make some shopping suggestions based on items bought by people who also searched for protractors.Plus they offerred to give me $50 off this purchase if I apply for the Amazon credit card, guaranteed to never exceed an interest rate above 26.5%!
I clicked a flashing advertisement with the enticing tagline, “Come on over to the dark side with dark chocolate mini candy bars.” We learned there was 1 gram of fiber per 5 mini chocolate bars. So we only have to eat 150 candy bars to get the recommended daily intake of fiber.  My son thought the candy bars were practically a health food and plans on substituting them for broccoli.
Of course I had to pin the picture of fiber-full dark chocolate bars on Pinterest and then on my Facebook wall so that everyone interested could “Like” the Dark Side! I couldn’t leave Facebook (keep me logged on this computer, Check) without contacting the 5 friends with birthdays this month, see status updates on 22 friends, no lie, play a couple of games of word scramble, print out coupons for more protractors, check out friends tagged on photos, say “Maybe” to the 18 events to which I was invited by people I’m not sure I know,  “Like” the 400th “Baby’s first steps” pictures of someone I don’t recognize and whew, I am exhausted!
I told my son we absolutely had to get off the internet because we had exceeded the two hour screen time limit recommended by the American Academy of Pediatrics.
Let’s see what Mayo Clinic Center for Social Media, KevinMD and Dr. Oz are tweeting about (dark chocolate) and we’ll call it a night!
Ultimately, my son nixed the Mount Rushmore Road Show mother-son bonding idea (South Dakota or bust!) as well as the Google toolbar costume. I tweeted to the world @VeeMD “My son is dressing up as a Mad Scientist for Halloween and I am dressing up as a Petri dish.” (Less than140 characters.)
*when bought with qualifying $50 minimum purchase
Last edited on October 11, 2012 by Dr. Vee

Dr. Vee appeared on the WJXT Jacksonville Morning Show to discuss the Top Ten Items for Your Medicine Cabinet.

Dr. Vandana Bhide of the Mayo Clinic appears on the WJXT-TV news4jax.com Jacksonville, Florida 10:30 PM News show to discuss some of the warning signs of depression. Anyone, especially someone who has recently experienced a serious trauma such as an accident, illness, divorce, death, is at risk for depression. Sometimes people are afraid to ask if a person is depressed or has suicidal thoughts. Studies show that people who are questioned about their depressive or suicidal thoughts are often relieved to be able to finally discuss their feelings. This show of support may actually prevent someone’s suicide. Another telltale sign of depression is when someone is no longer interested in his or her usual activities. Too much or too little sleep, weight loss or weight gain can all be seen in depressed people. Don’t be afraid to ask someone if he or she is depressed, and urge the person to seek help from a health professional.

Dr. Vee talks about latch key kids and important factors to remember when you leave your child at home alone.