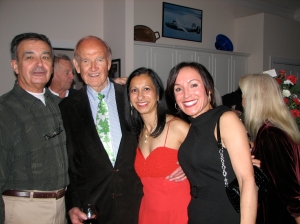 Senator George McGovern in his home in St. Augustine Florida

Senator George McGovern will be mourned, no matter what your political view. He lived part time in St. Augustine, Florida, the nation’s oldest city. He always returned to his hometown of Sioux Falls, South Dakota. Senator McGovern kept a busy travel schedule. Three years before his death, at the age of 87, he had a book tour to promote his biography of Abraham Lincoln. Senator McGovern went skydiving for his 88th birthday! He was a tireless advocate of feeding children around the world, travelling to Africa in his later years to promote his cause. He attended the funeral of his vice presidential nominee, Sargeant Shriver.

He supported candidates in the North Florida area. Senator McGovern was a very outgoing man who loved to entertain in his home. He hosted opera singers from Gainesville for an evening of opera in his home. He was quick witted and loved to give speeches at his parties.

George missed his wife Eleanor, who died in 2007. He moved part time to St. Augustine in 2008.  He told me his only regret was not spending more time with his children. He wrote about his daughter who died of alcoholism. His other children are successful and well adjusted.

I and many others will miss George’s insights and humor. He has a lasting legacy on America.

The first ever Race for the Taste 5K run was this past weekend. We had over six hundred runners and they were amazingly fast!!!! The setting was beautiful Anastasia State Park, where runners had a great view of the ocean as they ran!

The runners then had free admission to the Taste of St. Augustine, where people could sample different food items and vote for their best in category.

Thanks to Dr. Pineau and everyone at Borland-Groover Gastroenteroloy Clinic for being title sponsor. Orthopedic Associates of St. Augustine, Dr. Marema/Koppman and OB/GYN Associates of St. Augustine were other key sponsors, making this Race incredibly successful! I had fun creating and sponsoring the Runner’s bags (Featuring Ask Dr. Vee, your Holistic Medicine Expert). I also had fun (but was stressed to the max) handing out water to the runners during the race!

Local celebs who ran in the race (and were fashionably dressed to boot, and did not sweat at all despite the 84 degree Florida heat) were too numerous to list, but included Bill Abare (former EPIC Community Services President), Dr. Ram Eyyunni, Dr. Ben Pineau (and son, who runs faster than me!) and Dr. Bill Platko.

All proceeds went to EPIC Community Services, which strives to help patients and families battling addiction through Education, Counseling, Intervention and Prevention.

This year I am Vice President of the Board of EPIC Community Services and am getting on the job training from Bev Slough, St. John’s County School Board President and current EPIC Board of Directors President. Patrick Canan, former EPIC President, and local attorney, did not dress up like Elton John, but he was a sponsor of the Taste of St. Augustine.

Thanks to all the great restaurants who were there, Patti Greenough and Teresa Andrews who worked tirelessly to make the event successful!

Rebecca Romaine, was EPIC in helping mastermind such a fantastically successful race. Valerie Lee was the water gal–we are already planning on how to improve our water skills for next year (ok, yeah, garbage cans for the water cups would have been an obvious idea. Also, some of the cups were flimsy. Who knew that you had to test run the cups in advance???) Fortunately, Tara Smith-Vighetti and
Renee Wauldron were there to help pour and hand out water cups during the race!

Saw a great group of local actors in various levels of training in Meisner technique of acting. Very interesting approach to acting. Course is taught by the very talented Joanna Horton-Liao.

Elsa Tilton and her best friend May (played by Ginny Gladu)

Tonight, I acted a play written by a local playwright–who is also a cancer doctor by profession.  Ever noticed that many people like to do something completely different from their jobs?  Like sing, dance, do triathalons?

For me it is theater–and I had fun acting in this short play.  It was an adaptation of a Marjorie Kinan Rawlings play, The Pelican’s Shadow.  The play showed the parallel between those huge black pelicans found near the Atlantic Ocean and a pompous perfectionist scientist and husband.  Unfortunately, no pelicans flew overhead on cue during the play, but the weather was perfect on the oceanfront theater.  Lots of nice people very involved and knowledgeable about the arts.  Oh, and they can all cook!

Sometimes it is nice to do something that is completely different than what you do every day in your “real life.”  And if you were successful at what you tried, the endeavor is even sweeter!

<
Photograph Copenhagen Opera House Courtesy of Eric Keesen
Senator McGovern had a group of friends over to his house to listen to  amazing opera singers from the University of Florida Gainesville.  Food was catered by Gypsy Cab Company.  I love their hummus!
Senator McGovern had the “last song” and sang from his heart!
The beauty of music–it so enriches our lives!